“Even the smallest person can change the course of the future.” -J.R.R. Tolkien

Here below are the notes* Samwise Gamgee took along the journey.  Based on The Fellowship of the Ring by J.R.R. Tolkien and The Atlas of Middle Earth by Karen Fonstad).

THE JOURNAL OF SAMWISE GAMGEE 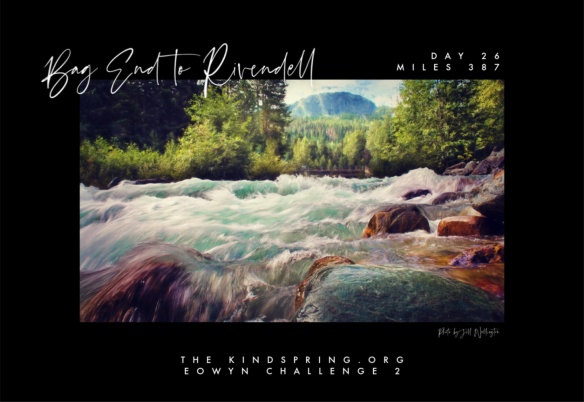 “We can to a slope beyond that steep ride and the going is much easier now.  It’s a bright and fair day.  I hope we make better time.   Strider saw Loudwater, or the Bruinen he calls it, in the distance. I couldn’t make it out.  Seems his eyes are as good or better than Merry’s.” 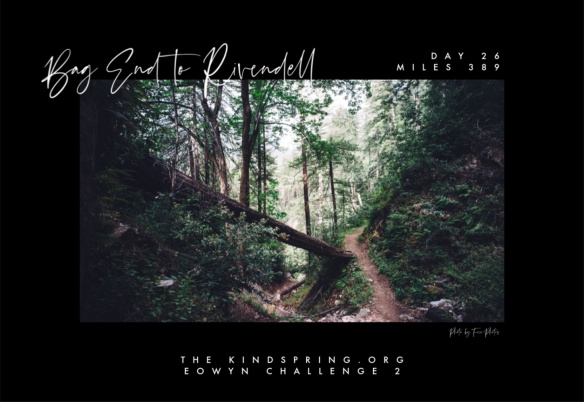 “We’re making better time today now that we’re out of those steep hills.  There’s a trail now in the woods so we can make good time on that.”

“We can to a deep hole in the ground.  The sun shone in on a small fall of water the caught the light.  Strider says it’s a troll hole.  First we ever saw one.  We didn’t linger.”

Mr. Frodo went stone-cold tonight just after we stumbled into a clearing. And there were the old Stone Trolls. Strider says Mr. Frodo is passing into the shadow world and if it don’t stop, he’s is going to be like one of them foul things that hunt us. Merry and Pippin were as afraid as I ever saw them, but my own face must have looked the same. We got Mr. Frodo comfortable as we could. After a while, he fell asleep. I made up a poem about the Stone Trolls to get our minds off of everything. Near as I can remember, this is what I said:

‘My lad,’ said Troll, ‘this bone I stole.
But what be bones that lie in a hole?
Thy nuncle was dead as a lump o’ lead,
Afore I found his shinbone.
Tinbone! Skinbone!
He can spare a share for a poor old troll,
For he don’t need his shinbone.’

But just as he thought his dinner was caught,
He found his hands had hold of naught.
Before he could mind, Tom slipped behind
And gave him the boot to larn him.
Warn him! Darn him!
A bump o’ the boot on the seat, Tom thought,
Would be the way to larn him.

But harder than stone is the flesh and bone
Of a troll that sits in the hills alone.
As well set your boot to the mountain’s root,
For the seat of a troll don’t feel it.
Peel it! Heal it!
Old Troll laughed, when he heard Tom groan,
And he knew his toes could feel it. 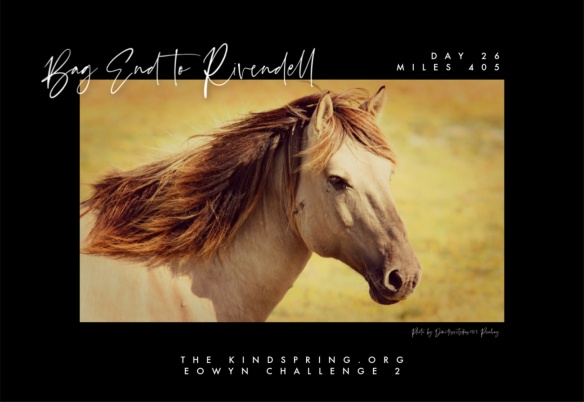 “The oddest thing happened, and it’s a good thing too.  While searching for a place to camp hidden enough from those riders, we heard a horse! About scared us all, but Strider could tell it wasn’t those creatures.  He called a name, Glorfindel.  He’s an elf! I never saw such a fine-looking elf.  He looks like some kind of leader of the elves the way he speaks and carries himself.

He said that Elrond sent many from Rivendell out to look for Mr. Frodo in order to bring him to safety. This was good news indeed. Glorfindel put Mr. Frodo on his horse, a beautiful beast he calls Asfaloth.  The horse is wider and has a gentler way of walking that our poor Bill.  It’s a relief and a blessing to unload some of our packs onto Bill again., that’s for certain.  Tomorrow we’ll make better time, but today we did very well, over 30 miles Strider reckons.

Glorfindel. I won’t soon forget him.  Tall, strongly built with blond hair down to the middle of his back. He moves silently when he walks.  He has a deep voice, but it’s kind of soothing I guess.  He and Strider seem to be good friends.  They speak in the elvish tongue, so I don’t know what they are saying but Strider told us some of it after he spoke with him.”

“Mr. Frodo needs to get to Rivendell as quick as we can get him there.  With Glorfindel’s help, we moved through the woods. He can see in the dark, it would seem.  We marched all night and right now we are camped next to the road.  It’s near dawn.  I swear all the world is asleep but us. I even saw a fox asleep on a stump and it looked familiar.  It couldn’t be that same fox we saw on the first night.  Could it?”

BACK TO EARTH AUTHOR NOTES

*This journal is a fanfiction creation by Niki Flow, based the beautiful works of J.R.R. Tolkien; on the meticulous milestone-marker notes in The Atlas of Middle Earth by Karen Fonstad and on the Eowyn Challenge website:

Bag End to Rivendell with Frodo and Company:  458 Miles